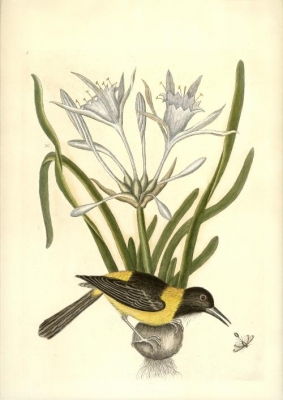 Almost one hundred years before John James Audubon issued his book, Birds of America, Englishman Mark Catesby was developing his interests in the natural world that would lead to his important publication. His life’s work began while on a trip to America in 1712 when he sent plants and seeds back to England. He gained the attention of wealthy amateur naturalists who dubbed him “the curious botanist.” Almost ten years later a group of prominent London gentlemen interested in obtaining exotic plants for their gardens sponsored Catesby on a collecting trip to Carolina, Florida and the Bahamas. This collecting trip lasted from 1722 to 1726 and earned him much acclaim. He was made a member of the The Royal Society in 1733.

When Catesby returned home, he translated the watercolor drawings made during his collecting trip into hand-colored etchings to illustrate a two volume book, The Natural History of Carolina, Florida and Bahama Islands and an Appendix. He wrote the text and etched over 200 prints of the flora and fauna he saw. The three prints that the Joel Lane Museum House owns, Whip-Poor-Will with Ginseng, Cacao Tree (Chocolate), and Yellow and Black Pye (Tropical) Spider Lily (pictured above), were part of the Appendix that was printed in 1748. In order to support such a large printing job, Catesby sold groups of twenty prints for two guineas.

Few naturalists prior to Catesby included birds in their collections. Not only did Catesby include birds, he noted details about their habitat in his prints and may have been the first to note that birds migrate. Unlike Audubon, who worked from dead specimens, Catesby painted live birds and often depicted them in flight. Naturalist-biographer, Elliott Coves, called Catesby the “founder of American ornithology.” Others have called him the “colonial Audubon.”