Enjoy some copyright-free coloring pages from the Joel Lane House. 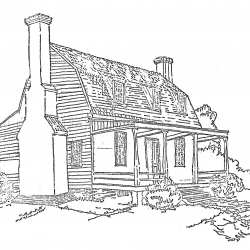 This coloring sheet shows the Joel Lane house from the front. Note that this image shows the house with it’s original sized shed porch, which ran the entire length of the house.

This British political cartoon depicts King George III of England being bucked by his horse, representing the American colonies. The riding crop (used to spur a horse forwards) is made up of various weapons, representing the perception of painful and unfair treatment of the Colonies by the Crown.

This image was drawn in in 1779 by William White. 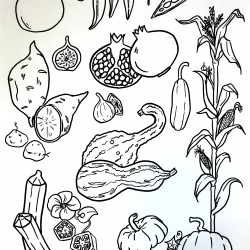 This coloring page shows various fruits and vegetables that would have been grown/available during the time period Joel Lane lived in piedmont North Carolina (1769-1795).

Apples and Corn were the main crops grown on Joel Lane’s plantation.