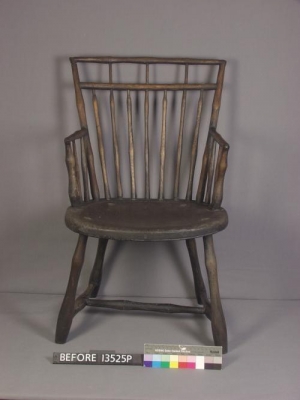 The Joel Lane Museum House is fortunate to own a very rare armchair made in Petersburg, Virginia circa 1800. It is rare because it still has the original label on the bottom. The label reads: “Windsor chairs—made and sold by Joel Brown—Old Street, Petersburg—with all kinds of fancy chairs, settees and cribbs for children; Riding Chair Bodies in the neatest and newest fashions; columns turned for Porticos and Porches; Cabinet turning executed in the neatest manner. Orders from the country will be attended to. N.B.A. Considerable supply of Copal and Japan Varnishes.”

This chair is also interesting because of its maker’s connections to Raleigh. According to Elizabeth Reid Murray in her epic tome, Wake, Capital County of North Carolina, Joel Brown took an apprentice “to lern the Trade of a Windsor chair maker” in 1817, made settees for the [NC] Senate while it was meeting in “Government House” in 1831, and furnished chairs for the Wake County court room in 1835. His obituary of 1848 gives June 16, 1816 as the date of his arrival in Raleigh.

Brown set up his shop on Hillsborough Street and continued in the business in that location and others in Wake for thirty years. In 1817, he advertised that he had “procured the best Workmen from the North” who could promise chairs, settees, cribs, and cradles “finished in the first Stile of Elegance.”

According to Murray, Robert M. Brown, son of Joel Brown, corresponded with President Andrew Johnson. Reid transcribes a letter from President Johnson to Mr. Brown dated September 9, 1865 bemoaning the effects of the civil war just ended and hoping for peace and a ” love for the government which our fathers founded.” Brown received the letter in response to one he had written to Johnson reminding him that the two men had been boyhood friends in Raleigh.

Murray further states that a firm still in operation in the 1980s in Raleigh could trace its origins to Raleigh’s pre-Civil War period: Brown-Wynne Funeral Home. The business was begun in 1836 by founder Henry J. Brown, cabinetmaker and coffin maker. We have been able to confirm the connection between Joel Brown and Henry Brown. Joel Brown was the father of Henry J. Brown who married Lydia Lane, daughter of Nathaniel M. Lane, son of James Lane, brother of Joel Lane.