Joel Lane is considered a founding father of both Wake County and Raleigh. Lane introduced the legislation to found Wake County in 1771, which was passed by the British-run Colonial Assembly. In 1792, Lane sold 1,000 acres of land to the State of North Carolina, on which to build Raleigh as the new state capital.

Joel Lane was born in 1739, near present day Halifax, North Carolina. In 1762 he married Martha Hinton, and they had three sons. After Martha died in 1771, Lane married her younger sister, Mary Hinton, in 1772. Together, Joel and Mary had nine more children. Joel Lane died on March 29, 1795. Mary followed five days later on April 3, 1795.

Beginning around 1769, Joel Lane established a large plantation in the central North Carolina piedmont —“backcountry” land land that would later become Raleigh. Over his lifetime, he and his family owned at least 43 enslaved men, women, and children. Enslaved laborers cleared the wilderness, built the plantation’s structures, raised crops and livestock, cooked and cared for Joel Lane’s family, and performed the myriad other tasks necessary to develop and maintain a large plantation.

Joel Lane was an active participant in the affairs of North Carolina both as a colony and as a state. Joel Lane is known as a “Father of Wake County” because as a representative from Johnston County to the Colonial Assembly at New Bern in 1770, he introduced the bill for Wake County’s creation from parts of Johnston, Orange and Cumberland counties.

He was a member of the Colonial Assembly for Johnston (1770-71) and Wake (1773) counties, a colonel in the militia, justice of the peace for Wake and Johnston Counties, and served Wake County as senator in the North Carolina General Assembly for eleven terms (1782-85, 1787-95).

Lane supported North Carolina’s break from Great Britain. In 1775 he was a delegate to the revolutionary Provincial Congress held in Hillsborough. There he was appointed a member of the Council of Safety for the Hillsborough District. Joel’s brother, Jesse Lane, and nephew (Martin) were both Patriot soldiers during the War. His father-in-law, John Hinton, was colonel of the Wake County militia and played an important role at the Battle of Moore’s Creek Bridge; two of John Hinton’s sons (Joel Lane’s brothers-in-law) were instrumental in the battle as well.

Though Joel Lane had been commissioned a Lieutenant Colonel in the Wake County Militia in 1772, that command was given to Theophilus Hunter in 1773, and there is no evidence that Joel Lane ever personally saw battle. His role in the war was more administrative: he served as a member of the Council of Safety, the wartime governing body that oversaw the new State of North Carolina when the Provincial Congress was not in session. In August of 1776, he hosted the Council’s meetings in his home. Lane was also made responsible for distributing 100 bushels (800 gallons) of confiscated Loyalist/Tory salt—spoils of the Battle of Moore’s Creek Bridge—to the local Patriot soldiers. Salt was an essential commodity for food preservation. 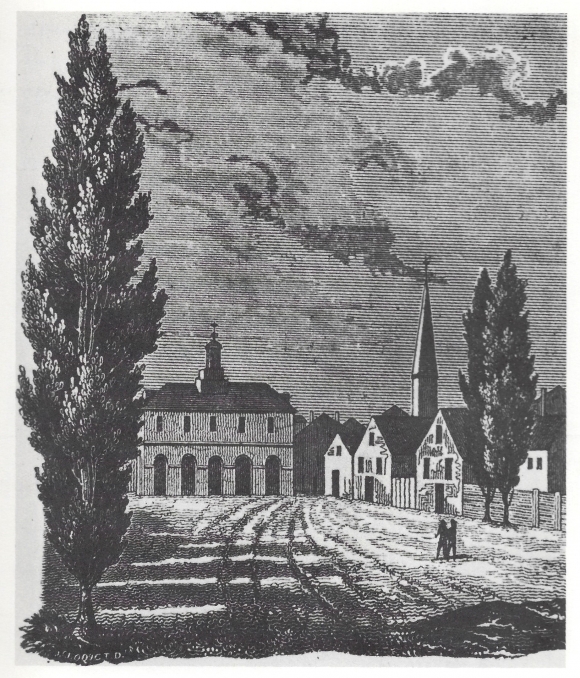 Engraving of 1789 Convention in Fayetteville

Joel Lane was a delegate to the 1788 Constitutional Convention in Hillsborough, and he voted along with the majority of North Carolina delegates to “neither ratify nor to reject the U.S. Constitution,” which lacked a Bill of Rights (voted Antifederalist). North Carolina and Rhode Island were the two states who did not accept the original document.

Both he and his son Henry Lane were delegates to the subsequent 1789 Constitutional Convention at Fayetteville, which did ratify the U.S. Constitution with its new Bill of Rights ammendment (both voted Federalist).

In 1792, Lane was a presidential elector representing Wake County.

List of Wake County Delegates Elected to Constitutional Convention of 1788

List of Wake County Delegates Elected to Constitutional Convention of 1789

Colonel Lane served as a member of the first Board of Trustees of the University of North Carolina, from when it was established in 1789 until his 1795 death. Lane maneuvered to have his fellow trustees meet on a regular basis in his own backyard at Wake Court House, but this proviso was struck from the original charter for the University. He then offered 640 acres of land he owned near what is now Cary, N. C., in Wake County, for the site of the university, but his offer was declined. The first student of UNC was Lane’s nephew-by-marriage, Hinton James, son of Martha and Mary Hinton Lane’s sister, Alice, and Captain John James. Governor David Lowry Swain, grandson of Joel Lane’s brother, Jesse, served as President of the University from 1835-68. 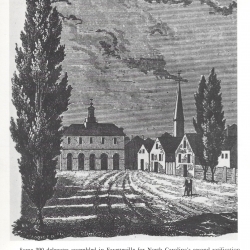 Massengill, Stephen E. “North Carolina Votes on the Constitution: A Roster of Delegates to the State Ratification Conventions of 1788-1789.” Raleigh: North Carolina Department of Cultural Resources, 1988.