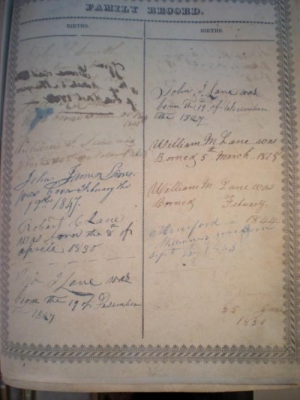 A very generous Lane descendant from Texas visited the house in 1988 and gave us a William Lane’s Bible. A William Lane in Wake County married Martha Pasteur on 31 July 1793 at Green Hill near Halifax. Joel’s third son William was born Oct.15,1768 and died March 5, 1848. We don’t know if these three Williams are the same man.

In it are four handwritten pages with listings of births, marriages, and deaths. Staff of the Hill Library at NC State University kindly photographed the four pages with a high resolution camera. If you would like to receive larger images by email, or close ups, please use the contact button.

The handwriting is hard to decipher. Because of the thinness of the paper and the use of quills for writing, the words on the back of the pages often show through making reading even more difficult. Some of the writing has faded to illegibility. More photos are posted below the transcript.

Page 3
Marriages
[First column]
Nancy Lane was married on the 6 October in the year of our Lord 1842
James W Lane & Phebe Stanfield was married the 18th of June 1844
Thomas E Lane and Mary Azelea Humphreys was married [illegible]
[Second column]
Elizes Powell was married on the 13th of Dec. 1842
F A Polk and Emiline [Lane] Hancock was married July the 9th 1862