This page is under construction - please pardon our mess.

“We passed through a delicious Country….Here is plenty of good Timber…and as there is Stone enough in both [the Haw and Yadkin] Rivers, and the Land is extraordinary rich, no Man that will be content within the Bounds of Reason, can have any grounds to dislike it. And they that are otherwise, are the best Neighbors when farthest off.” - John Lawson, “A New Voyage to Carolina” (1709)

(Bishir and Southern. “A Guide to the Historic Architecture of Piedmont North Carolina,” pg. 3.)

The transfer of the province from the Lords Proprietors to the crown marked the beginning of a significant era in North Carolina. The history of the colony for the next forty years was characterized by a steady and rapid growth in population; the settlement of the Cape Fear Valley and the Piedmont; the expansion of agriculture, industry, and trade; some improvement in transportation and the beginnings of a crude postal system; a higher standard of living; the rapid growth of dissenting religious sects; the founding of many churches, a few schools, and some libraries; and the publication of the first books and newspapers in the colony.

The royalization of North Carolina caused no significant change in governmental structure or powers. The powers and duties of the governor, the council, the assembly, the courts, and local officials such as sheriffs and justices of the peace remained much the same as they had been. The crown simply replaced the proprietors as the fountainhead of authority in government and in administration of land policy. Henceforth the King and Privy Council, rather than the proprietors, controlled the selection of the governor and other royal officials, instructed the governors on the conduct of their office, formulated policies, and heard complaints from the colony, which were usually voiced by an official agent resident in England. North Carolina was among the last of the colonies to establish a regular agency, and the Lower House of the legislature (assembly) asserted its authority over that agent. The colony had sent special agents to London as early as 1676, but it was not until an act of October 1768, that a permanent agent, James Abercromby, was appointed. He served the assembly as agent for more than a decade.

The crown placed major emphasis upon the promotion of the naval-stores industry and other economic activities, which fitted into the British mercantile system. North Carolina came to have closer contact with the various agencies of colonial administration the King, Privy Council, Board of Trade, Treasury Board, Commissioners of the Customs, Admiralty Board, and Navy Board. The assembly became more jealous of its powers and engaged in controversies with the governors over salaries, paper currency, Indian policy, defense, and other matters of vital concern both to England and to the province.

The royal government was characterized by greater stability, stronger administration, and better enforcement of law and order than had prevailed under the proprietary regime.

The royal governors of North Carolina:

These men were of higher caliber and had more experience than the proprietary governors, and they compared favorably with the governors of other colonies. Although all of the governors had prolonged and bitter quarrels with their assemblies—an experience not peculiar to North Carolina—these men, by and large, had the interests of the colony at heart. All of them tried to promote policies for the settlement and expansion of North Carolina, for improvements in transportation, trade, communication, education, religion, and other movements for the general welfare of the colony as well as for the best interests of the British Empire. The colonial governor had the difficult, if not impossible, task of trying to serve two masters, one of whom commissioned him while the other paid his salary.

The royal period of North Carolina history, 1729-75, was one of rapid growth and expansion of population. At the close of proprietary rule there were only about thirty thousand White Americans and fewer than six thousand Black Americans in the province. At this time North Carolina was perhaps the most sparsely settled of the English continental colonies, and most of its population, chiefly of English stock, lived largely in the Tidewater. By 1740 there were “a few families” along the Hyco, Eno, and Haw rivers, and six years later a few settlers “west of the Yadkin.” In 1751 the governor reported that “inhabitants flock in here daily, mostly from Pennsylvania and other parts of America, and some directly from Europe. They commonly seat themselves toward the West and have got near the mountains.” By 1752 the colony’s population was estimated at 265,000 and the Black population at 80,000. North Carolina had become the fourth most populous English continental colony, exceeded only by Virginia, Pennsylvania, and Massachusetts.

The most impelling motives for immigration from Europe to the English colonies were:

1. Wars, past, present, and anticipated
2. Poverty, unemployment, and general economic unrest
3. Religious persecution
4. Legal discriminations, and escape from harsh and vindictive penal systems
5. The desire to start life anew in the New World

During the royal period, Scotch-Irish, Germans, Scottish Highlanders, Welsh, English, and others poured into the Upper Cape Fear Valley and into the backcountry. Settlements reached the foot of the mountains by 1760 and soon pushed across the mountains.

A vast area, hitherto almost unbroken wilderness, was turned into farms and homes for European settlers. Roads, bridges, and ferries were built; sawmills and gristmills were established; lumber, naval stores, potash, shipbuilding, and other industries were developed; some river channels were improved and a few lighthouses constructed. Old towns such Edenton and New Bern took on new life, and many new towns were begun, the most significant of which were Wilmington, Halifax, Hillsborough, Salisbury, Salem, Charlotte, and what is now Fayetteville. The creation of six new counties during this period is ample evidence of the growth and expansion of population. 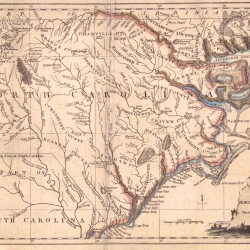 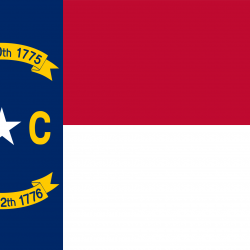