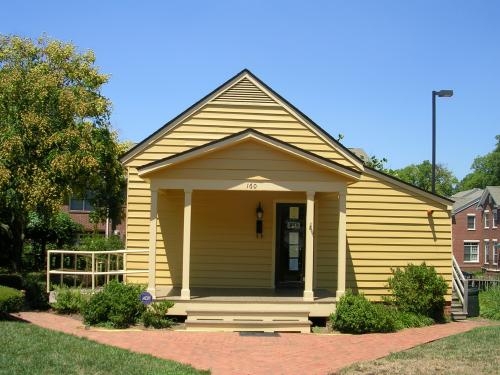 The Visitors Center houses the gift shop and offices. Built about 1840, it was an addition to the side of Joel Lane’s home. When his house was moved from Boylan Street to its current location on West Hargett Street in 1914, the new lot was narrower. The addition would not fit on the side of the house so it was moved to the rear.

When the Museum House was restored to it’s original configuration in the 1970s, the addition was removed. It was moved to the north side of the site and was rented as a private residence for 30 years. In April 2007, it was remodeled and opened as our Visitors Center.

About the Paint Color

The historic Joel Lane House was repainted from a yellow to it’s original ruby red in the winter of 2019.

The Visitor’s Center remains the yellow that the Joel Lane House was previously painted in order to differentiate it from the historic house as well as to showcase what color the house used to be.

The Visitor’s Center has a single occupancy public restroom.