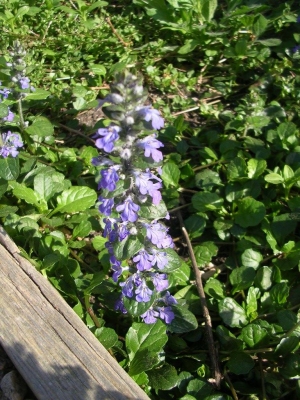 Has a mild narcotic and sedative effect (similar to foxglove) that lowers heart rate.

Besides the name Bugle, it is called Middle Confound and Middle Comfrey, Brown Bugle, and by some Sicklewort, and Herb-Carpenter; though in Essex we call another herb by that name.

This has larger leaves than those of the Self-heal, but else of the same fashion, or rather longer; in some green on the upper side, and in others more brownish, dented about the edges, somewhat hairy, as the square stalk is also which rises up to be half a yard high sometimes, with the leaves set by couples, from the middle almost, whereof upwards stand the flowers, together with many smaller and browner leaves than the rest, on the stalk below set at distance, and the stalk bare between them; among which flowers, are also small ones of a blueish and sometimes of an ash colour, fashioned like the flowers of Ground-ivy, after which come small, round blackish seeds. The root is composed of many strings, and spreads upon the ground.

The white flowered Bugle differs not in form or greatness from the former, saving that the leaves and stalks are always green, and never brown, like the other, and the flowers thereof are white.

They grow in woods, copses, and fields, generally throughout England, but the white flowered Bugle is not so plentiful as the former.

They flower from May until July, and in the mean time perfect their seed. The roots and leaves next thereunto upon the ground abiding all the Winter.

This herb belongs to Dame Venus: If the virtues of it makes you fall in love with it (as they will if you be wise) keep a syrup of it to take inwardly, an ointment and plaister of it to use outwardly, always by you.

The decoction of the leaves and flowers made in wine, and taken, dissolves the congealed blood in those that are bruised inwardly by a fall, or otherwise is very effectual for any inward wounds, thrusts, or stabs in the body or bowels; and it is an especial help in all wound-drinks, and for those that are liver-grown (as they call it.) It is wonderful in curing all manner of ulcers and sores, whether new and fresh, or old and inveterate; yea, gangrenes and fistulas also, if the leaves bruised and applied, or their juice be used to wash and bathe the place; and the same made into a lotion, and some honey and alum, cures all sores in the mouth and gums, be they ever so foul, or of long continuance; and works no less powerfully and effectually for such ulcers and sores as happen in the secret parts of men and women. Being also taken inwardly, or outwardly applied, it helps those that have broken any bone, or have any member out of joint. An ointment made with the leaves of Bugle, Scabions and Sanicle, bruised and boiled in hog’s grease, until the herbs be dry, and then strained forth into a pot for such occasions as shall require; it is so singularly good for all sorts of hurts in the body, that none that know its usefulness will be without it.

The truth is, I have known this herb cure some diseases of Saturn, of which I thought good to quote one. Many times such as give themselves much to drinking are troubled with strange fancies, strange sights in the night time, and some with voices, as also with the disease Ephialtes, or the Mare. I take the reason of this to be (according to Fernelius) a melancholy vapour made thin by excessive drinking strong liquor, and, so flies up and disturbs the fancy, and breeds imaginations like itself, viz. fearful and troublesome. Those I have known cured by taking only two spoonfuls, of the syrup of this herb after supper two hours, when you go to bed. But whether this does it by sympathy, or antipathy, is some doubt in astrology. I know there is great antipathy between Saturn and Venus in matter of procreation; yea, such a one, that the barrenness of Saturn can be removed by none but Venus! nor the lust of Venus be repelled by none but Saturn; but I am not of opinion this is done this way, and my reason is, because these vapours though in quality melancholy, yet by their flying upward, seem to be something aerial; therefore I rather think it is done by antipathy; Saturn being exalted in Libra, in the house of Venus. 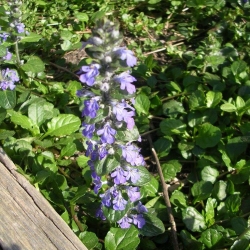 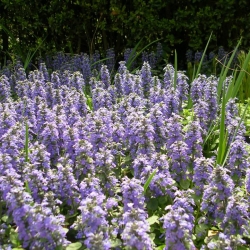