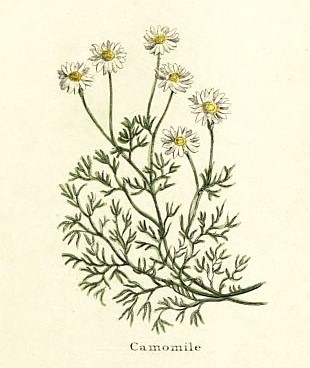 Thomas Jefferson listed chamomile as one of the herbs to be grown in the Monticello kitchen garden.

Culpeper's The Complete Herbal (1653) - On Chamomile

“It is so well known every where, that it is but lost time and labour to describe it. The virtues thereof are as follow.

A decoction made of Camomile, and drank, takes away all pains and stitches in the side. The flowers of Camomile beaten, and made up into balls with Gill, drive away all sorts of agues, if the part grieved be anointed with that oil, taken from the flowers, from the crown of the head to the sole of the foot, and afterwards laid to sweat in his bed, and that he sweats well. This is Nechessor, an Egyptian’s, medicine. It is profitable for all sorts of agues that come either from phlegm, or melancholy, or from an inflammation of the bowels, being applied when the humours causing them shall be concocted; and there is nothing more profitable to the sides and region of the liver and spleen than it. The bathing with a decoction of Camomile takes away weariness, eases pains, to what part of the body soever they be applied. It comforts the sinews that are over-strained, mollifies all swellings: It moderately comforts all parts that have need of warmth, digests and dissolves whatsoever has need thereof, by a wonderful speedy property. It eases all pains of the cholic and stone, and all pains and torments of the belly, and gently provokes urine. The flowers boiled in posset-drink provokes sweat, and helps to expel all colds, aches, and pains whatsoever, and is an excellent help to bring down women’s courses. Syrup made of the juice of Camomile, with the flowers, in white wine, is a remedy against the jaundice and dropsy. The flowers boiled in lye, are good to wash the head, and comfort both it and the brain. The oil made of the flowers of Camomile, is much used against all hard swellings, pains or aches, shrinking of the sinews, or cramps, or pains in the joints, or any other part of the body. Being used in clysters, it helps to dissolve the wind and pains in the belly; anointed also, it helps stitches and pains in the sides.

Nechessor saith, the Egyptians dedicated it to the Sun, because it cured agues, and they were like enough to do it, for they were the arrantest apes in their religion that I ever read of. Bachinus, Bena, and Lobel, commend the syrup made of the juice of it and sugar, taken inwardly, to be excellent for the spleen. Also this is certain, that it most wonderfully breaks the stone: Some take it in syrup or decoction, others inject the juice of it into the bladder with a syringe. My opinion is, that the salt of it, taken half a dram in the morning in a little white or Rhenish wine, is better than either; that it is excellent for the stone, appears in this which I have seen tried, viz., That a stone that has been taken out of the body of a man being wrapped in Camomile, will in time dissolve, and in a little time too.”

Source: The Project Gutenberg EBook of The Complete Herbal, by Nicholas Culpeper, [39] 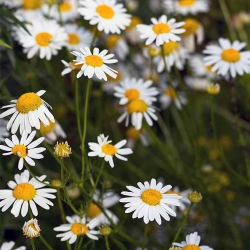 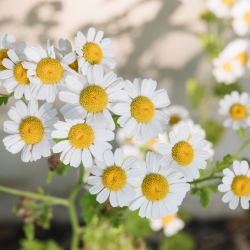 A 2010 article from The National Center for Biotechnical Information (NCBI): Chamomile - A Herbal Medicine of the Past with Bright Future

A webpage on Chamomile from the Traditional Roots Institute