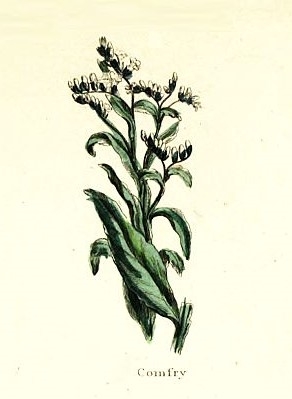 . . . good for ruptures and broken bones; yea, it is said to be so powerful to consolidate and knit together, that, if they are boiled with dissevered pieces of flesh in a pot, it will join them together again. –Nicolas Culpeper (dubiously)

Other Uses: Once used as a chicory-like coffee substitute (Unsafe: highly toxic!)

Folklore: Believed to keep travelers safe when carried in a shoe

“This is a very common but a very neglected plant. It contains very great virtues.

[Descript] The common Great Comfrey has divers very large hairy green leaves lying on the ground, so hairy or prickly, that if they touch any tender parts of the hands, face, or body, it will cause it to itch; the stalks that rise from among them, being two or three feet high, hollow and cornered, is very hairy also, having many such like leaves as grow below, but less and less up to the top: At the joints of the stalks it is divided into many branches, with some leaves thereon, and at the ends stand many flowers in order one above another, which are somewhat long and hollow like the finger of a glove, of a pale whitish colour, after which come small black seeds. The roots are great and long, spreading great thick branches under ground, black on the outside, and whitish within, short and easy to break, and full of glutinous or clammy juice, of little or no taste at all.

There is another sort in all things like this, only somewhat less, and bears flowers of a pale purple colour.

[Place] They grow by ditches and water-sides, and in divers fields that are moist, for therein they chiefly delight to grow. The first generally through all the land, and the other but in some places. By the leave of my authors, I know the first grows in dry places.

[Time] They flower in June or July, and give their seed in August.

[Government and virtues] This is an herb of Saturn, and I suppose under the sign Capricorn, cold, dry, and earthy in quality. What was spoken of Clown’s Woundwort may be said of this. The Great Comfrey helps those that spit blood, or make a bloody urine. The root boiled in water or wine, and the decoction drank, helps all inward hurts, bruises, wounds, and ulcer of the lungs, and causes the phlegm that oppresses them to be easily spit forth: It helps the defluction of rheum from the head upon the lungs, the fluxes of blood or humours by the belly, women’s immoderate courses, as well the reds as the whites, and the running of the reins happening by what cause soever.

A syrup made thereof is very effectual for all those inward griefs and hurts, and the distilled water for the same purpose also, and for outward wounds and sores in the fleshy or sinewy part of the body whatsoever, as also to take away the fits of agues, and to allay the sharpness of humours.

A decoction of the leaves hereof is available to all the purposes, though not so effectual as the roots. The roots being outwardly applied, help fresh wounds or cuts immediately, being bruised and laid thereto; and is special good for ruptures and broken bones; yea, it is said to be so powerful to consolidate and knit together, that if they be boiled with dissevered pieces of flesh in a pot, it will join them together again.

It is good to be applied to women’s breasts that grow sore by the abundance of milk coming into them; also to repress the over much bleeding of the hæmorrhoids, to cool the inflammation of the parts thereabouts, and to give ease of pains. The roots of Comfrey taken fresh, beaten small, and spread upon leather, and laid upon any place troubled with the gout, doth presently give ease of the pains; and applied in the same manner, gives ease to pained joints, and profits very much for running and moist ulcers, gangrenes, mortifications, and the like, for which it hath by often experience been found helpful.”

Source: The Project Gutenberg EBook of The Complete Herbal, by Nicholas Culpeper, [54] 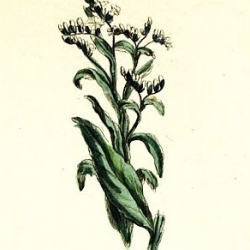 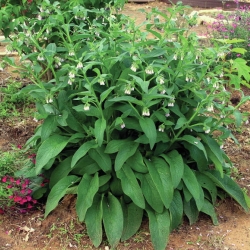 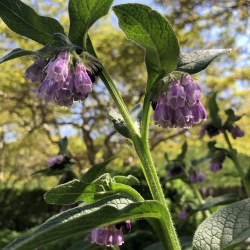