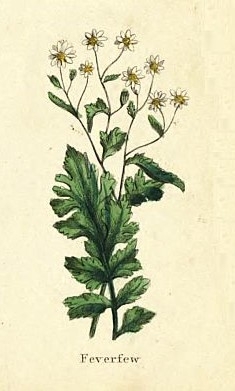 Historically Used to Treat: headache, fever, cough and asthma, urinary and kidney problems, depression, vertigo, gas, swelling, opium overdoses, worms; it was especially known for women’s health problems, including “hysteria,” menstrual problems, and problems in childbirth. It was also said to remove freckles “and other . . . deformities in the face” (Culpeper). Today, Feverfew is still used for migraines and other headaches.

Culpeper's The Complete Herbal (1653) - On Feverfew

”[Descript] Common Featherfew has large, fresh, green leaves, much torn or cut on the edges. The stalks are hard and round, set with many such like leaves, but smaller, and at the tops stand many single flowers, upon small foot stalks, consisting of many small white leaves standing round about a yellow thrum in the middle. The root is somewhat hard and short, with many strong fibres about it. The scent of the whole plant is very strong, and the taste is very bitter.

[Place] This grows wild in many places of the land, but is for the most part nourished in gardens.

[Time] It flowers in the months of June and July.

[Government and virtues] Venus commands this herb, and has commended it to succour her sisters (women) and to be a general strengthener of their wombs, and remedy such infirmities as a careless midwife hath there caused if they will but be pleased to make use of her herb boiled in white wine, and drink the decoction; it cleanses the womb, expels the after-birth, and doth a woman all the good she can desire of an herb. And if any grumble because they cannot get the herb in winter, tell them, if they please, they may make a syrup of it in summer; it is chiefly used for the disease of the mother, whether it be the strangling or rising of the mother, or hardness, or inflammation of the same, applied outwardly thereunto. Or a decoction of the flowers in wine, with a little Nutmeg or Mace put therein, and drank often in a day, is an approved remedy to bring down women’s courses speedily, and helps to expel the dead birth and after-birth. For a woman to sit over the hot fumes of the decoction of the herb made in water or wine, is effectual for the same; and in some cases to apply the boiled herb warm to the privy parts.

The decoction thereof made with some sugar, or honey put thereto, is used by many with good success to help the cough and stuffing of the chest, by colds, as also to cleanse the reins and bladder, and helps to expel the stone in them.

The powder of the herb taken in wine, with some Oxymel, purges both choler and phlegm, and is available for those that are short winded, and are troubled with melancholy and heaviness, or sadness of spirits. It is very effectual for all pains in the head coming of a cold cause, the herb being bruised and applied to the crown of the head: As also for the vertigo, that is a running or swimming in the head. The decoction thereof drank warm, and the herb bruised with a few corns of Bay salt, and applied to the wrists before the coming of the ague fits, doth take them away.

The distilled water takes away freckles, and other spots and deformities in the face. The herb bruised and heated on a tile, with some wine to moisten it, or fried with a little wine and oil in a frying-pan, and applied warm outwardly to the places, helps the wind and cholic in the lower part of the belly. It is an especial remedy against opium taken too liberally.”

Source: The Project Gutenberg EBook of The Complete Herbal, by Nicholas Culpeper, [73] 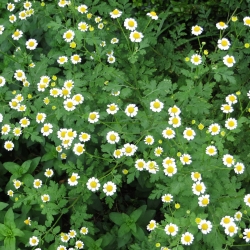 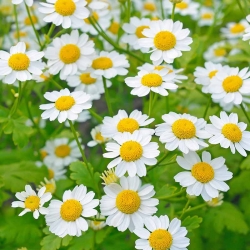 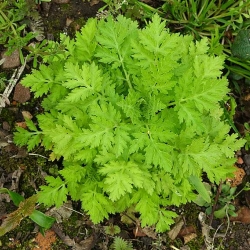 Here is an article on from the National Center for Biotechnical Information about the uses of Feverfew.