Modern Uses: Horehound is still used in cough drops and is used by some herbalists to treat type 2 diabetes and hypertension.

“A remedy for those that are short-winded, have a cough, or are fallen into a consumption. . . ” – Herbalist Nicolas Culpeper, 1652

Culpeper's The Complete Herbal (1653) - On Horehound

“There are two kinds of Horehound, the white and the black. The black sort is likewise called Hen-bit; but the white one is here spoken of.

[Descript] Common Horehound grows up with square hairy stalks, half a yard or two feet high, set at the joints with two round crumpled rough leaves of a sullen hoary green colour, of a reasonable good scent, but a very bitter taste. The flowers are small, white, and gaping, set in a rough, hard prickly husk round about the joints, with the leaves from the middle of the stalk upward, wherein afterward is found small round blackish seed. The root is blackish, hard and woody, with many strings, and abides many years.

[Place] It is found in many parts of this land, in dry grounds, and waste green places.

[Time] It flowers in July, and the seed is ripe in August.

[Government and virtues] It is an herb of Mercury. A decoction of the dried herb, with the seed, or the juice of the green herb taken with honey, is a remedy for those that are short-winded, have a cough, or are fallen into a consumption, either through long sickness, or thin distillations of rheum upon the lungs. It helps to expectorate tough phlegm from the chest, being taken from the roots of Iris or Orris. It is given to women to bring down their courses, to expel the after-birth, and to them that have taken poison, or are stung or bitten by venemous serpents. The leaves used with honey, purge foul ulcers, stay running or creeping sores, and the growing of the flesh over the nails. It also helps pains of the sides. The juice thereof with wine and honey, helps to clear the eyesight, and snuffed up into the nostrils, purges away the yellow-jaundice, and with a little oil of roses dropped into the ears, eases the pains of them. Galen saith, it opens obstructions both of the liver and spleen, and purges the breast and lungs of phlegm: and used outwardly it both cleanses and digests. A decoction of Horehound (saith Matthiolus) is available for those that have hard livers, and for such as have itches and running tetters. The powder hereof taken, or the decoction, kills worms. The green leaves bruised, and boiled in old hog’s grease into an ointment, heals the biting of dogs, abates the swellings and pains that come by any pricking of thorns, or such like means; and used with vinegar, cleanses and heals tetters. There is a syrup made of Horehound to be had at the apothecaries, very good for old coughs, to rid the tough phlegm; as also to void cold rheums from the lungs of old folks, and for those that are asthmatic or short-winded.”

Source: The Project Gutenberg EBook of The Complete Herbal, by Nicholas Culpeper [97] 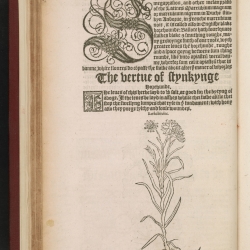 Gallery Image 3: From William Turner’s A New Herball (1551) - Scan from the Library of Congress