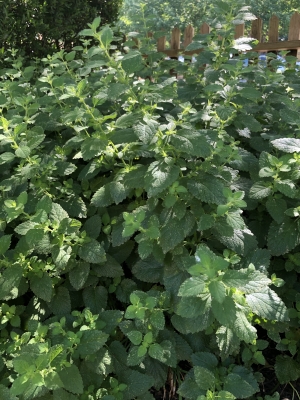 Let a syrup made of the juice of it and sugar . . . be kept in every gentlewoman’s house, to relieve the weak stomachs and sick bodies of their poor sickly neighbours. –Herbalist Nicolas Culpeper, 1652

“Lemon Balm, a vigorous, self-seeding, perennial herb, was cultivated in Europe by 1551. Abercrombie noted in 1778, “so refreshing is the smell . . . that (it has) the first claim to a place in our gardens.” Thomas Jefferson listed “Balm” among his garden herbs in 1794. It’s lemon-scented leaves are useful in cooking, teas, and home remedies, and the rather insignificant flowers are very attractive to bees. Jefferson-documented: This plant was documented by Thomas Jefferson in his Garden Book, Notes on the State of Virginia, or other writings.”

“A member of the Lamiaceae (mint) family, lemon balm (Melissa officinalis) belongs to a genus which includes five species of perennial herbs native to Europe, central Asia and Iran. Although Melissa officinalis originated primarily in Southern Europe, it is now naturalized around the world, from North America to New Zealand….

Over the years, many common names have been associated with M. officinalis, including balm, English balm, garden balm, balmmint, common balm, melissa, sweet balm, heart’s delight and honey plant. Although M. officinalis has sometimes been called bee balm due to its traditional use for attracting honeybee swarms, it should not be confused with Monarda didyma, which also bears this common name.”

Culpepper's The Complete Herbal - On Balm

“This herb is so well known to be an inhabitant almost in every garden, that I shall not need to write any discription thereof, although its virtues, which are many, may not be omitted.

[Government & Virtures] It is an herb of Jupiter, and under Cancer, and strengthens nature much in all its actions.

The Arabian physicians have extolled the virtues thereof to the skies; although the Greeks thought it not worth mentioning. Seraphio says, it causes the mind and heart to become merry, and revives the heart, faintings and swoonings, especially of such who are overtaken in sleep, and drives away all troublesome cares and thoughts out of the mind, arising from melancholy or black choler; which Avicen also confirms. It is very good to help digestion, and open obstructions of the brain, and hath so much purging quality in it (saith Avicen) as to expel those melancholy vapours from the spirits and blood which are in the heart and arteries, although it cannot do so in other parts of the body. Dioscorides says, that the leaves steeped in wine, and the wine drank, and the leaves externally applied, is a remedy against the stings of a scorpion, and the bitings of mad dogs; and commends the decoction thereof for women to bathe or sit in to procure their courses; it is good to wash aching teeth therewith, and profitable for those that have the bloody flux. The leaves also, with a little nitre taken in drink, are good against the surfeit of mushrooms, helps the griping pains of the belly; and being made into an electuary, it is good for them that cannot fetch their breath: Used with salt, it takes away wens, kernels, or hard swelling in the flesh or throat; it cleanses foul sores, and eases pains of the gout. It is good for the liver and spleen.

A tansy or caudle made with eggs, and juice thereof while it is young, putting to it some sugar and rose-water, is good for a woman in child-birth, when the after-birth is not thoroughly voided, and for their faintings upon or in their sore travail. The herb bruised and boiled in a little wine and oil, and laid warm on a boil, will ripen it, and break it.” 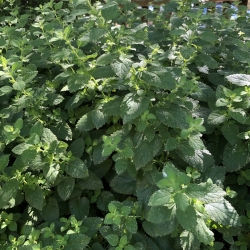