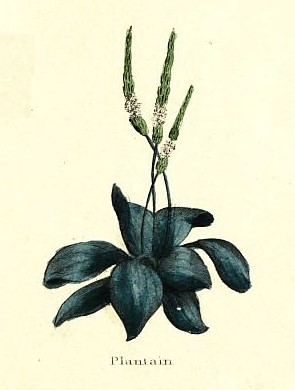 Culpeper's The Complete Herbal (1653) - On Plantain

“This grows usually in meadows and fields, and by path sides, and is so well known, that it needs no description.

[Time] It is in its beauty about June, and the seed ripens shortly after.

[Government and virtues] It is true, Misaldus and others, yea, almost all astrology-physicians, hold this to be an herb of Mars, because it cures the diseases of the head and privities, which are under the houses of Mars, Aries, and Scorpio: The truth is, it is under the command of Venus, and cures the head by antipathy to Mars, and the privities by sympathy to Venus; neither is there hardly a martial disease but it cures.

The juice of Plantain clarified and drank for divers days together, either of itself, or in other drink, prevails wonderfully against all torments or excoriations in the intestines or bowels, helps the distillations of rheum from the head, and stays all manner of fluxes, even women’s courses, when they flow too abundantly. It is good to stay spitting of blood and other bleedings at the mouth, or the making of foul and bloody water, by reason of any ulcer in the reins or bladder, and also stays the too free bleeding of wounds. It is held an especial remedy for those that are troubled with the phthisic, or consumption of the lungs, or ulcers of the lungs, or coughs that come of heat. The decoction or powder of the roots or seeds, is much more binding for all the purposes aforesaid than the leaves. Dioscorides saith, that three roots boiled in wine and taken, helps the tertain agues, and for the quartan agues, (but letting the number pass as fabulous) I conceive the decoction of divers roots may be effectual. The herb (but especially the seed) is held to be profitable against the dropsy, the falling-sickness, the yellow jaundice, and stoppings of the liver and reins. The roots of Plantain, and Pellitory of Spain, beaten into powder, and put into the hollow teeth, takes away the pains of them. The clarified juice, or distilled water, dropped into the eyes, cools the inflammations in them, and takes away the pin and web; and dropped into the ears, eases the pains in them, and heals and removes the heat. The same also with the juice of Houseleek is profitable against all inflammations and breakings out of the skin, and against burnings and scaldings by fire and water. The juice or decoction made either of itself, or other things of the like nature, is of much use and good effect for old and hollow ulcers that are hard to be cured, and for cankers and sores in the mouth or privy parts of man or woman; and helps also the pains of the piles in the fundament. The juice mixed with oil of roses, and the temples and forehead anointed therewith, eases the pains of the head proceeding from heat, and helps lunatic and frantic persons very much; as also the biting of serpents, or a mad dog. The same also is profitably applied to all hot gouts in the feet or hands, especially in the beginning. It is also good to be applied where any bone is out of joint, to hinder inflammations, swellings, and pains that presently rise thereupon. The powder of the dried leaves taken in drink, kills worms of the belly; and boiled in wine, kills worms that breed in old and foul ulcers. One part of Plantain water, and two parts of the brine of powdered beef, boiled together and clarified, is a most sure remedy to heal all spreading scabs or itch in the head and body, all manner of tetters, ringworms, the shingles, and all other running and fretting sores. Briefly, the Plantains are singularly good wound herbs, to heal fresh or old wounds or sores, either inward or outward.”