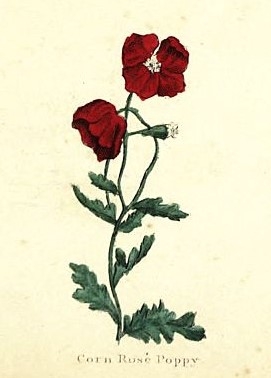 Other Uses: Chemicals derived from similar plants include opium and its derivatives, legal and illegal, medicine and snake oil, life-saving and lethal. Also grown ornamentally. Seeds are frequently used in baking.

“Of this I shall describe three kinds, viz. the White and Black of the Garden, and the Erratic Wild Poppy, or Corn Rose.

[Descript] The White Poppy hath at first four or five whitish green leaves lying upon the ground, which rise with the stalk, compassing it at the bottom of them, and are very large, much cut or torn on the edges, and dented also besides: The stalk, which is usually four or five feet high, hath sometimes no branches at the top, and usually but two or three at most, bearing every one but one head wrapped up in a thin skin, which bows down before it is ready to blow, and then rising, and being broken, the flowers within it spreading itself open, and consisting of four very large, white, round leaves, with many whitish round threads in the middle, set about a small, round, green head, having a crown, or star-like cover at the head thereof, which growing ripe, becomes as large as a great apple, wherein are contained a great number of small round seeds, in several partitions or divisions next unto the shell, the middle thereof remaining hollow, and empty. The whole plant, both leaves, stalks, and heads, while they are fresh, young, and green, yield a milk when they are broken, of an unpleasant bitter taste, almost ready to provoke casting, and of a strong heady smell, which being condensed, is called Opium. The root is white and woody, perishing as soon as it hath given ripe seed.

The Black Poppy little differs from the former, until it bears its flower, which is somewhat less, and of a black purplish colour, but without any purple spots in the bottom of the leaf. The head of the seed is much less than the former, and opens itself a little round about the top, under the crown, so that the seed, which is very black, will fall out, if one turn the head thereof downward.

The wild Poppy, or Corn Rose, hath long and narrow leaves, very much cut in on the edges into many divisions, of a light green colour, sometimes hairy withal. The stalk is blackish and hairy also, but not so tall as the garden kind, having some such like leaves thereon to grow below, parted into three or four branches sometimes, whereon grow small hairy heads bowing down before the skin break, wherein the flower is inclosed, which when it is fully blown open, is of a fair yellowish red or crimson colour, and in some much paler, without any spot in the bottom of the leaves, having many black soft threads in the middle, compassing a small green head, which when it is ripe, is not bigger than one’s little finger’s end, wherein is contained much black seeds smaller than that of the garden. The root perishes every year, and springs again of its own sowing. Of this kind there is one lesser in all parts thereof, and differs in nothing else.

[Place] The garden kinds do not naturally grow wild in any place, but all are sown in gardens where they grow.

The Wild Poppy or Corn Rose, is plentifully enough, and many times too much so in the corn fields of all counties through this land, and also on ditch banks, and by hedge sides. The smaller wild kind is also found in corn fields, and also in some other places, but not so plentifully as the former.

[Time] The garden kinds are usually sown in the spring, which then flower about the end of May, and somewhat earlier, if they spring of their own sowing.

The wild kind flower usually from May until July, and the seed of them is ripe soon after the flowering.

[Government and virtues] The herb is Lunar, and of the juice of it is made opium; only for lucre of money they cheat you, and tell you it is a kind of tear, or some such like thing, that drops from Poppies when they weep, and that is somewhere beyond the seas, I know not where beyond the Moon. The garden Poppy heads with seeds made into a syrup, is frequently, and to good effect used to procure rest, and sleep, in the sick and weak, and to stay catarrhs and defluxions of thin rheums from the head into the stomach and lungs, causing a continual cough, the fore-runner of a consumption; it helps also hoarseness of the throat, and when one have lost their voice, which the oil of the seed doth likewise. The black seed boiled in wine, and drank, is said also to dry the flux of the belly, and women’s courses. The empty shells, or poppy heads, are usually boiled in water, and given to procure rest and sleep: so doth the leaves in the same manner; as also if the head and temples be bathed with the decoction warm, or with the oil of Poppies, the green leaves or the heads bruised and applied with a little vinegar, or made into a poultice with barley-meal or hog’s grease, cools and tempers all inflammations, as also the disease called St. Anthony’s fire. It is generally used in treacle and mithridate, and in all other medicines that are made to procure rest and sleep, and to ease pains in the head as well as in other parts. It is also used to cool inflammations, agues, or frenzies, or to stay defluxions which cause a cough, or consumptions, and also other fluxes of the belly or women’s courses; it is also put into hollow teeth, to ease the pain, and hath been found by experience to ease the pains of the gout.

The Wild Poppy, or Corn Rose (as Matthiolus saith) is good to prevent the falling-sickness. The syrup made with the flower, is with good effect given to those that have the pleurisy; and the dried flowers also, either boiled in water, or made into powder and drank, either in the distilled water of them, or some other drink, works the like effect. The distilled water of the flowers is held to be of much good use against surfeits, being drank evening and morning; It is also more cooling than any of the other Poppies, and therefore cannot but be as effectual in hot agues, frenzies, and other inflammations either inward or outward. Galen saith, The seed is dangerous to be used inwardly.”