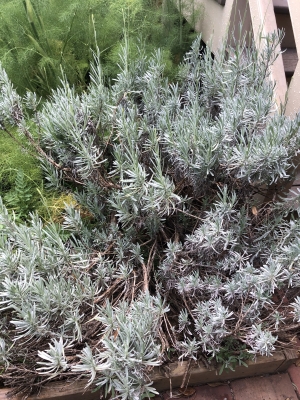 Other Uses: Still used as a flavoring and scent. Historically used a strewing herb, and in shampoos, tooth washes, perfumes, and wedding cakes. Repels insects and has antibacterial properties.

“The Normans may have first brought this shrubby, evergreen, Mediterranean herb to Britain as early as the 11th century. Thomas Jefferson noted Rosemary among 14 other herbs for his Monticello garden in 1794. It has long been valued as a culinary herb in soups, sauces, and vegetable and meat dishes; for its medicinal uses; and for its lasting aromatic fragrance. Jefferson-documented: This plant was documented by Thomas Jefferson in his Garden Book, Notes on the State of Virginia, or other writings.”

“Our garden Rosemary is so well known, that I need not describe it.

[Time] It flowers in April and May with us, sometimes again in August.

[Government and virtues] The Sun claims privilege in it, and it is under the celestial Ram. It is an herb of as great use with us in these days as any whatsoever, not only for physical but civil purposes. The physical use of it (being my present task) is very much used both for inward and outward diseases, for by the warming and comforting heat thereof it helps all cold diseases, both of the head, stomach, liver, and belly.

The decoction thereof in wine, helps the cold distillations of rheum into the eyes, and all other cold diseases of the head and brain, as the giddiness or swimmings therein, drowsiness or dullness of the mind and senses like a stupidness, the dumb palsy, or loss of speech, the lethargy, and fallen-sickness, to be both drank, and the temples bathed therewith. It helps the pains in the gums and teeth, by rheum falling into them, not by putrefaction, causing an evil smell from them, or a stinking breath. It helps a weak memory, and quickens the senses. It is very comfortable to the stomach in all the cold griefs thereof, helps both retention of meat, and digestion, the decoction or powder being taken in wine. It is a remedy for the windiness in the stomach, bowels, and spleen, and expels it powerfully. It helps those that are liver-grown, by opening the obstructions thereof. It helps dim eyes, and procures a clear sight, the flowers thereof being taken all the while it is flowering every morning fasting, with bread and salt. Both Dioscorides and Galen say, That if a decoction be made thereof with water, and they that have the yellow jaundice exercise their bodies directly after the taking thereof, it will certainly cure them.

The flowers and conserve made of them, are singularly good to comfort the heart, and to expel the contagion of the pestilence; to burn the herb in houses and chambers, corrects the air in them. Both the flowers and leaves are very profitable for women that are troubled with the whites, if they be daily taken. The dried leaves shred small, and taken in a pipe, as tobacco is taken, helps those that have any cough, phthisic, or consumption, by warming and drying the thin distillations which cause those diseases. The leaves are very much used in bathings; and made into ointments or oil, are singularly good to help cold benumbed joints, sinews, or members.

The chymical oil drawn from the leaves and flowers, is a sovereign help for all the diseases aforesaid, to touch the temples and nostrils with two or three drops for all the diseases of the head and brain spoken of before; as also to take one drop, two, or three, as the case requires, for the inward griefs: Yet must it be done with discretion, for it is very quick and piercing, and therefore but a little must be taken at a time.

There is also another oil made by insolation in this manner: Take what quantity you will of the flowers, and put them into a strong glass close stopped, tie a fine linen cloth over the mouth, and turn the mouth down into another strong glass, which being set in the sun, an oil will distil down into the lower glass, to be preserved as precious for divers uses, both inward and outward, as a sovereign balm to heal the disease before-mentioned, to clear dim sights, and to take away spots, marks, and scars in the skin.”

Source: The Project Gutenberg EBook of The Complete Herbal, by Nicholas Culpeper, [156] 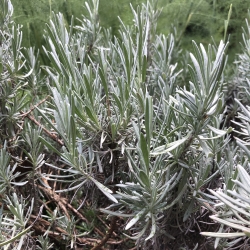 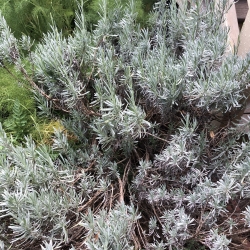 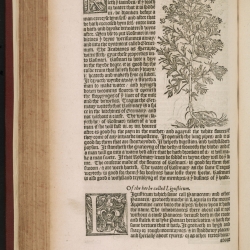 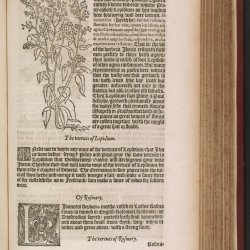 Gallery Images 3 & 4: From William Turner’s “The New Herball” (1551), from Library of Congress Scans