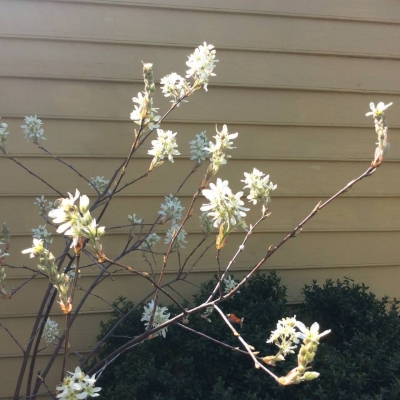 The flowers appear in early spring, “when the shad run” according to North-American tradition (The Shad is a type of fish.)

As Food: The fruit of the serviceberry is edible for both humans and animals. George Washington had a number of these trees planted at Mount Vernon.

“The fruit can be harvested for pies, muffins, jams, and wine. The saskatoon berry (a type of Amelanchier) is harvested commercially. One version of the Native American food pemmican was flavored by serviceberry fruits in combination with minced dried meat and fat.”

“The wood is brown, hard, close-grained, and heavy. The heartwood is reddish-brown, and the sapwood is lighter in color. It can be used for tool handles and fishing rods. Native Americans used it for arrow shafts. Members of the Pit River Tribe (California) would use the wood to create a sort of body armor, crafting it into a heavy robe or overcoat and corset armor worn during fighting.”

Serviceberry: Eat them raw; they taste much like blueberries, with an almost dry, grainy texture and a mild, sweet flavor. Bake them into pies, puddings or muffins. Dehydrate them like raisins. Make serviceberry jam or serviceberry ice cream. Or process serviceberries as pasteurized juice, mead or wine, or simmer the juice to make serviceberry syrup to use on pancakes or as a mixer with vodka and soda. 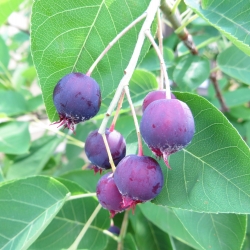 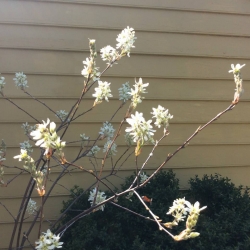 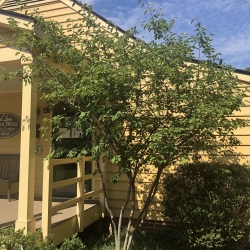