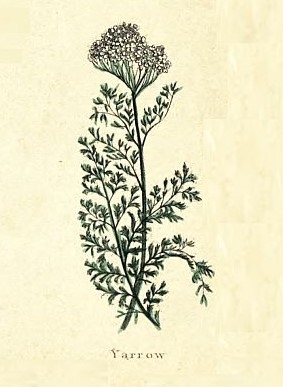 Other Uses: “Plant doctor” that deters disease in nearby plants, fungicide, alternative to hops in early beers, baldness prevention, though to attract fish.

In Folklore: Said to give the second sight, ensure that love will last at least seven years and draw distant friends, prevent infants’ souls from being stolen, bring dreams of one’s true love when kept under pillow, used in Chinese I-Ching divination before coins. Associated with Achilles of Greek myth, who was taught to use it by the centaur Chiron (alternatively, it grew from rust scraped from Achilles’ spear).

[Descript] It hath many long leaves spread upon the ground, finely cut, and divided into many small parts. Its flowers are white, but not all of a whiteness and stayed in knots, upon divers green stalks which rise from among the leaves.

[Place] It is frequent in all pastures.

[Time] It flowers late, even in the latter end of August.

[Government and virtues] It is under the influence of Venus. An ointment of them cures wounds, and is most fit for such as have inflammations, it being an herb of Dame Venus; it stops the terms in women, being boiled in white wine, and the decoction drank; as also the bloody flux; the ointment of it is not only good for green wounds, but also for ulcers and fistulas, especially such as abound with moisture. It stays the shedding of hair, the head being bathed with the decoction of it; inwardly taken it helps the retentive faculty of the stomach: it helps the gonorrhea in men, and the whites in women, and helps such as cannot hold their water; and the leaves chewed in the mouth eases the tooth-ache, and these virtues being put together, shew the herb to be drying and binding. Achilles is supposed to be the first that left the virtues of this herb to posterity, having learned them of this master Chiron, the Centaur; and certainly a very profitable herb it is in cramps, and therefore called Militaris.”

Source: The Project Gutenberg EBook of The Complete Herbal, by Nicholas Culpeper, [199] 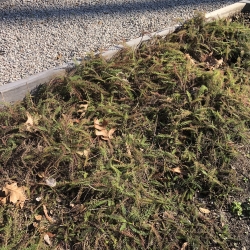 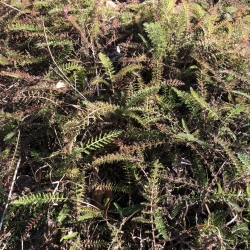 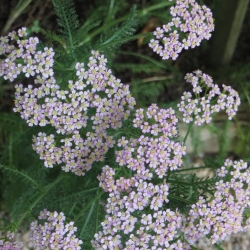