This page is under construction - please pardon our mess.

Both political and administrative reasons led to the creation of Wake County in the year 1771.

There was the issue of the Regulators, who were staging uprisings in the back country; lawmakers felt that more control could be exercised over these “insurgents” by dividing their large counties up into smaller ones.

However, new counties generally came about due simply to increased growth. The population in the Piedmont and west-of-central portions of the colony expanded steadily, particularly from the 1760s and onwards. The new citizens there wanted greater representation in the General Assembly, and new political units would entitle them to additional members. Issues like long travel distances and lodging also played a significant roll in the creation of new county seats.

Some residents of future Wake as well as citizens further west communicated these reasons to the General Assembly in the form of petitions.

One of the Wake petitions argued that a new county seat would be more easily accessible from their scattered homes for attending “General Musters, Election of Burgesses and vestrymen (sic)” and at Court as witnesses and jurymen. Many had to travel as often as four times a year the “vast Distance” from their homes to the Orange county seat of “Hillsborough: for these purposes.” Inadequate roads and the difficulty of crossing “many Large Water Courses” not only put them to “very Considerable hardships and Inconvenances (sic)” but also often made them “Subject to have fines and fortitudes” for not attending the required military, voting, and court duties.

A Birth Date Shared with Three Other Counties

The General Assembly therefore created four new counties: Chatham, Guilford and Surry and Wake. The act creating Wake County was to take effect on March 12, 1771, the earliest of the effective dates of the new counties. Similar wording in the four acts explained that the older counties were so large as to “render it grievous and Burdensome” as well as “extremely Difficult and expensive” for many inhabitants living great distances from their county seats to “do Public duties,” that is to attend the “Courts, General Musters and other Public Meeting therein.”

Joel Lane as Introducer of the Bill

The bill to establish Wake County was introduced in the House of Commons on December 17, 1770, by the representative from the western area of Johnston County, Joel Lane. Prior to presenting the bill, Lane read to the House of Commons a petition “from Sundry Inhabitants of Johnston County therein Praying a Division of the said County be made.” Successful in securing an affirmative vote on first reading in the House, the bill’s introducer, Joel Lane, along with Representative Walter Gibson from Cumberland County, walked from the meeting of the House to the grand new council chamber in the palace (Tryon Palace) to deliver the bill to the upper house. On January 2, 1771, after some amendments and many trips between the two meeting places, the Council completed the third reading, passed the bill, and ordered it to be engrossed. The bill was returned to the House of Commons where it had originated, and was given its final reading there on January 5. It received the governor’s approval on Tuesday, January 15, 1771.

Gallery of NC Counties Over Time 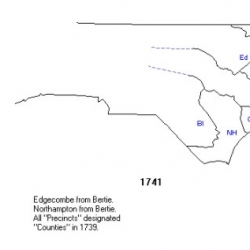 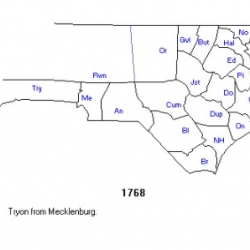 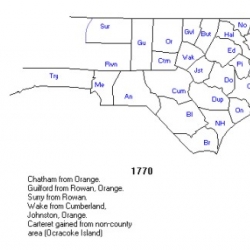 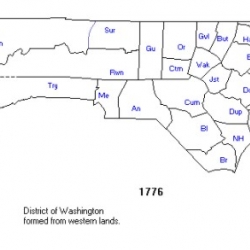 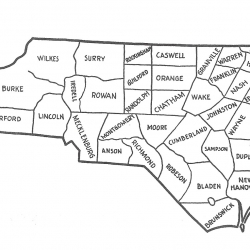 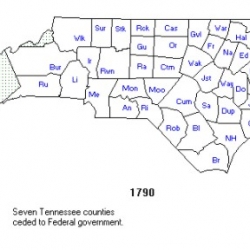 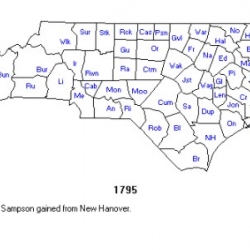 The above images where taken from a gif of changes to the NC Counties over time, which can be accessed here. More dates (1664-1965) can be accessed there than are shown here.

The general pattern of population growth in NC can be seen in the above snapshots of county additions.

Early settlement was almost entirely in the northeastern part of the state - mostly English from Virginia who had moved overland into NC. By the 1740s there is decent growth in the southeast by Wilmington and Brunswick, partly from South Carolinians moving upwards, and partly from immigration up the only easily accessible port and major river: the Cape Fear. From there the population slowly inches into the Piedmont following the Cape Fear and Neuse rivers upwards. The mountainous region of Appalachia is the last to be settled, and remained rural all throughout the 1800s.

Massengill, Stephen E. “North Carolina Votes on the Constitution: A Roster of Delegates to the State Ratification Conventions of 1788 and 1789.” Raleigh: NC Department of Cultural Resources, 1988.