Teen Aged Archaeologists Report on Artifacts: Mary Grayson Brook and Catherine Ambrose have spent the last year curating artifacts from two archaeological digs on land formerly belonging to Joel Lane. In 1969, nine graves were unearthed and in 1973, the original site of Lane’s house was researched. The girls washed, sorted, labeled, and identified many of the resulting artifacts. They summarized their findings in a fascinating presentation on Friday afternoon, August 5. 2011 for an enthusiast audience of Joel Lane volunteers and staff and other interested people. Their conclusions about the graveyard were inconclusive, but the evidence seem to indicate that the graves were dug after Joel Lane’s time. However, there may be more graves farther east of the nine burials found in 1969. Future digs will have to answer that mystery.
To read more, click on this link to the article from the News & Observer that ran on Monday, August 15: Hunting Down Local History 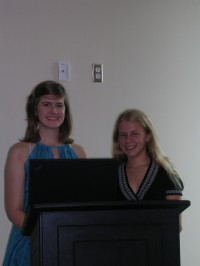 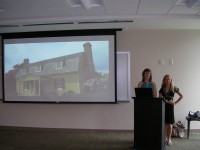